Starting from Gersick’s research,  stating that groups don’t develop in a universal sequence of stages as suggested by the five-phase model. Her research, which is based on the systems concept of punctuated equilibrium group development, found that the timing of when groups form and actually change the way they work is highly consistent.

What makes this research appealing is that it is based on studies of more than a dozen field and laboratory task forces assigned to complete a specific project. This research reveals that each group development begins with a unique approach to accomplishing its project that is set in its first meeting and includes the behavior and roles that dominate phase 1.

Phase 1 continues until one-half of the allotted time for project completion has expired (regardless of actual amount of time). At this midpoint, a major transition occurs that includes the dropping of the group’s old norms and behavior patterns and the emergence of new behavior and working relationships that contribute to increased progress toward completing the project.

The last meeting is marked by accelerated activity to complete the project. These findings are summarized in figure below. 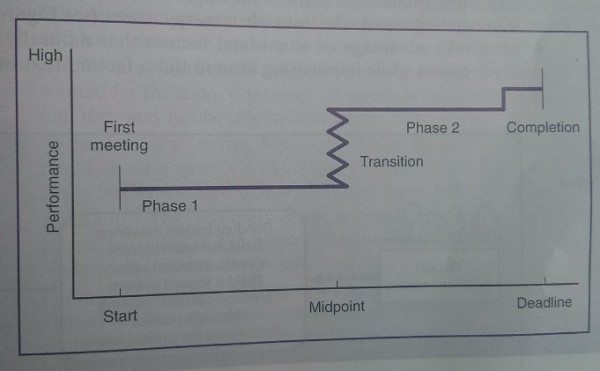 The remarkable discovery in these studies was that each group experienced its transition at the same point in its calendar —precisely halfway between the first meeting and the completion deadline—despite the fact that some groups spent as little as an hour on their project while others spent six months. It was as if the groups universally experienced a midlife crisis at this point.

The midpoint appeared to work like an alarm clock, heightening members’ awareness that time was limited and they needed to get moving. Within the context of the five-stage model, it suggests that groups begin by combining the forming and norming stages, then go through a period of low performing, followed by storming, then a period of high performing, and finally adjourning.

Gersick’s findings suggest that there are natural transition points during the life of teams in which the group is receptive to change and that such a moment naturally occurs at the scheduled midpoint of a project. However, a manager does not want to have to wait 6 months on a complicated 12-month project for a team to get its act together!

Here it is important to note that Gersick’s groups were working on relatively small-scale projects, i.e., a 4-person bank task force in charge of designing a new bank account in one month and a 12-person medical task force in charge of reorganizing two units of a treatment facility. In most cases no formal project plan was established. If anything, the results point to the importance of good project management and the need to establish deadlines and milestones.

By imposing a series of deadlines associated with important milestones, it is possible to create multiple transition points for natural group development. For example, a 12-month construction project can be broken down into six to eight significant milestones with the challenge of meeting each deadline producing the prerequisite tension for elevating team performance.

You should check Connie J. Gersick’s, “Time and Transition in Work Teams: Toward a New Model of Group Development,” for further insights into this group development model.

This article is the last part of a 4 segments series on best team building methods. If you have found this article through search...
Read more

This article is the third part of a 4 segments series on best team building methods. If you have found this article through search...
Read more

Setting realistic expectations, fostering agreement among all parties, and then delivering the product is frequently challenging and always requires a wide array of techniques....
Read more

This article focuses on the framework of project management. Just what are the components that go into building a successful project? How are we...
Read more

This industry independence has been a major factor in the development of project management as a discipline, but that independence doesn't extend to the...
Read more

The Evolution of the Project Management Discipline

From the time humans first worked together to build a shelter or cultivate a crop, there have been projects and project management. Yet it...
Read more

This site uses Akismet to reduce spam. Learn how your comment data is processed.

How to lead people, 12 leadership theories you should know and...

Organization Politics, How To Become The Puppet Master

90 Questions You Should Ask When Brainstorming Project Ideas