These organizations include suppliers and vendors, subcontractors, consulting firms, government and regulatory agencies, and, in many cases, community groups. Many of these organizations are likely to have very different cultures. Project managers have to be able to read and speak the culture they are working in to develop strategies, plans, and responses that are likely to be understood and accepted. Still, the emphasis of this article is on the relationship between organizational culture and project management structure, and it is necessary to defer further discussion of these implications.

Examining these dimensions we could hypothesize that certain aspects of the culture of an organization would support successful project management while other aspects would deter or interfere with effective management. The figure below attempts to identify which cultural characteristics create an environment conducive to completing most complex projects involving people from different disciplines. 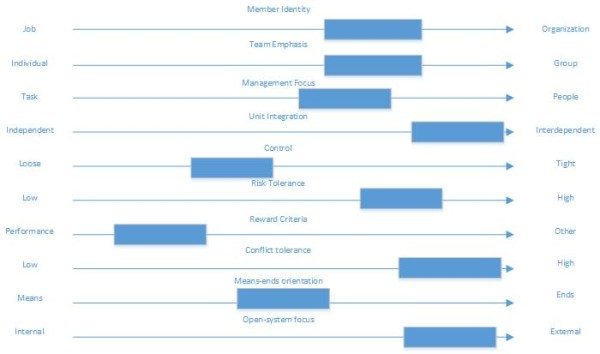 Note that, in many cases, the ideal culture is not at either extreme. For example, a fertile project culture would likely be one in which management balances its focus on the needs of both the task and the people. An optimal culture would balance concern with output (ends) and processes to achieve those outcomes (means).

In other cases, the ideal culture would be on one end of a dimension or the other.

For example, because most projects require collaboration across disciplines, it would be desirable that the culture of the organization emphasize working in teams and identifying with the organization, not just the professional domain.

Likewise it is important that the culture support a certain degree of risk taking and a tolerance for constructive conflict.

One organization that appears to fit this ideal profile is 3M(study case here). 3M has received acclaim for creating an entrepreneurial culture within a large corporate framework. The essence of its culture is captured in phrases that have been chanted often by 3M-ers throughout its history:

“Hire good people and leave them alone. If you put fences around people, you get sheep. Give people the room they need.”

Freedom and autonomy to experiment are reflected in the “15 percent rule,” which encourages technical people to spend up to 15 percent of their time on projects of their own choosing and initiative. This fertile culture has contributed to 3M’s branching out into more than 60,000 products and 35 separate business units.

In many cases, the current can be so strong that steering is all that is required. Such is the case for projects that operate in a project-friendly environment where team-work and cross-functional cooperation are the norms, where there is a deep commitment to excellence, and where healthy conflict is voiced and dealt with quickly and effectively.

Conversely, trying to complete a project in a toxic culture is like paddling upstream: much more time, effort, and attention are needed to reach the destination. This would be the situation in cultures that discourage teamwork and cooperation, that have a low tolerance for conflict, and where getting ahead is based less on performance and more on cultivating favorable relationships with superiors. In such cases, the project manager and her people not only have to overcome the natural obstacles of the project but also have to overcome the prevailing negative forces inherent in the culture of the organization.

The implications of this metaphor are important.

The key issue is the degree of interdependency between the parent organization and the project team. In cases where the prevalent organizational culture supports the behaviors essential to project completion, a weaker, more flexible project management structure can be effective.

For example, one of the major reasons Chaparral Steel is able to use a functional matrix to successfully complete incremental projects is that its culture contains strong norms for cooperation.

In both cases, the managerial strategy is to create a distinct team subculture in which a new set of norms, customs, and values evolve that will be conducive to project completion.

Under extreme circumstances this project culture could even represent a counterculture in that many of the norms and values are the antithesis of the dominant, parent culture.

Such was the case when IBM decided to develop their personal computer quickly in 1980. They knew that the project could get bogged down by the overabundance of computer knowledge and bureaucracy in the company. They also realized that they would have to work closely with suppliers and make use of many non-IBM parts if they were to get to the market quickly.

This was not the IBM way at the time, so IBM established the PC project team in a warehouse in Boca Raton, Florida, far from corporate headquarters and other corporate development facilities that existed within the organization.

View all of Alex Puscasu's posts.
Go to mobile version